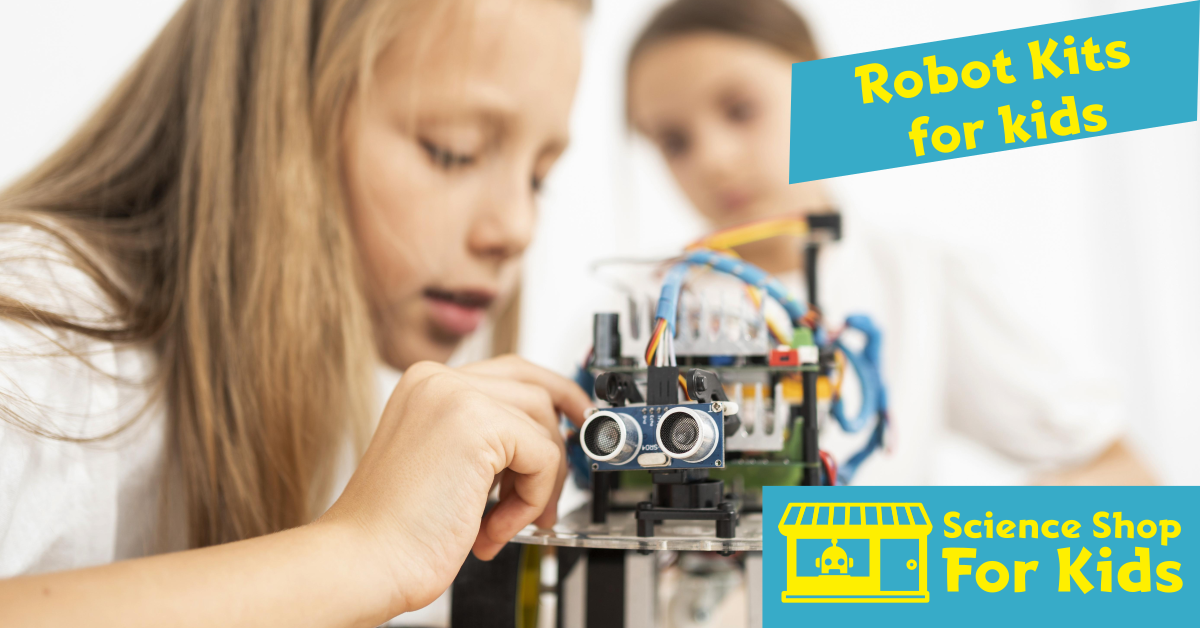 The robot toys for kids can speak whatever language you speak in a charming, attractive voice. This fascinates children and encourages them to speak more in order to expand their vocabulary.

Two different building robots that can move on land or in water for your child to build. With two levels of complexity. It ranging from entry level for younger children to advanced level for older kids who want to put their manipulative skills to the test.

There are no batteries required because it is powered by the sun. A solar power panel is included in the robot kit, which collects solar heat energy and converts it into an electric energy drive motor. It powers the gears and keeps the machine running smoothly. Allow your child to have hands-on experience with green technology. To learn about renewable energy sources, and have fun while doing it.

This robot toys for kids will teach kids how to design a solar-powered robot. while also helping them develop manual dexterity, problem-solving abilities, logical thinking, self-confidence. It recognizethe value of teamwork and collaboration. It’s also a great toy for encouraging young children to learn about mechanics and engineering. It also help in improving their STEM (Science, Technology, Engineering, and Math) skills.

The Wonder Workshop Dash is ideal for parents. Those who wish to start or improve their children’s coding skills. It is OK for children aged 6 and up. Unlike others that require substantial construction and engineering. The Dash is better suited to beginners because it comes charged and ready to play for roughly five hours. It will, however, age with your children’s abilities, as it comes with five iPhone and Android apps. Users can program the robots to sing, sketch, and dance, among other things, using the app.

The 4M Tin Can Robot is not only the cheapest robotics kit, but it’s also quite inventive. Your child can learn how to repurpose a recycled soda can into a fun and useful bot. With just a used soda can and an AA battery. This kit is recommended for kids ages 8 and above. Although the motor doesn’t do much more than make your tin can robot wobble. It’s a wonderful first design to build your child’s confidence. Before moving on to bigger—and more expensive—robotics kits.

Despite the fact that this Lego kit is excessively pricey for many. This programmable robot provides a lot of value. The Mindstorms comes with plans for five distinct designs, as well as a smartphone app with more than 50 games. It is approximately 1,000 parts, and a rechargeable battery for older kids aged 10 and up. If you already know your child is fascinated by robotics, this kit could be the answer to their prayers.

If your child is constantly inventing imaginary pals. The Anki Cozmo kit will most likely inspire them to build and program their own actual robot partner. Cozmo is a playful, programmable robot with AI that can show emotion. It recognize you, and remember your name. Aside with the little robot. It comes with a set of cubes that can be stacked and configured using coding on an iOS or Android app.

To turn him on, double-tap the button on his head. He will repeat to you with a cute voice whatever you laugh, sing, or say in any language. He is a close friend to both adults and children.

You don’t have to worry about him breaking up because all of his joints are 360° movable and twistable. He can also be used as a cell phone stand because he is a robot (as the pictures show). His smooth surface is also safe for children, as it won’t injure their hands.

He is portable enough to be taken no matter where his owner is. He is always a wonderful gift, whether for boys or girls, adults or children.

Because he is a robot, his body is built of a double die-cast posable metal body. The robot comes with a rechargeable battery and a charging wire, allowing you to use it for an extended period of time.

Eyes with Led Lights and a Funny Voice There are seven different flashing modes available to me. I’ll start working as soon as you press the power button once. If you touch my brow, my eyes will change colors and I will speak in a variety of voices.

He can repeat anything you say if you press the power button twice on my head. Taking, singing, laughing, and any other continuous sound are examples. (Note: When the robot is not in use, remember to turn it off by tapping the power button three times and hearing a low sound.)

This Talking Robot’s joints are fully 360° rotatable, and you can twist it if you want. As a decorative item or a pen holder. Because of its twin die-cast posable metal body, the toy robot is tough. There’s no need to be concerned about it being broken up by children.

The robot toys for kids can speak whatever language you speak in a charming, attractive voice. This fascinates children and encourages them to speak more in order to expand their vocabulary.

Roll over image to zoom in

A crocodile is included in this travel size crocodile toy, which is made of durable plastic. a reliable travel companion

Children take turns pushing down on one of the croc’s teeth, but if they press on the wrong one, the croc’s mouth closes. As the game proceeds, the environment becomes tense, with sporadic tooth bites.

During the game, the green-looking crocodile simulation design. It makes you feel both excited and terrified. This interactive toy is designed for 2 to 4 players; play with your friends or family, and you’ll have a lot of fun.

Educational toys can aid in the development of problem-solving skills. It help them in conflict resolution and the understanding of cause and effect. It also teaches youngsters how to share, assists in the development of fine and gross motor skills. Toys encourages creativity and imagination.