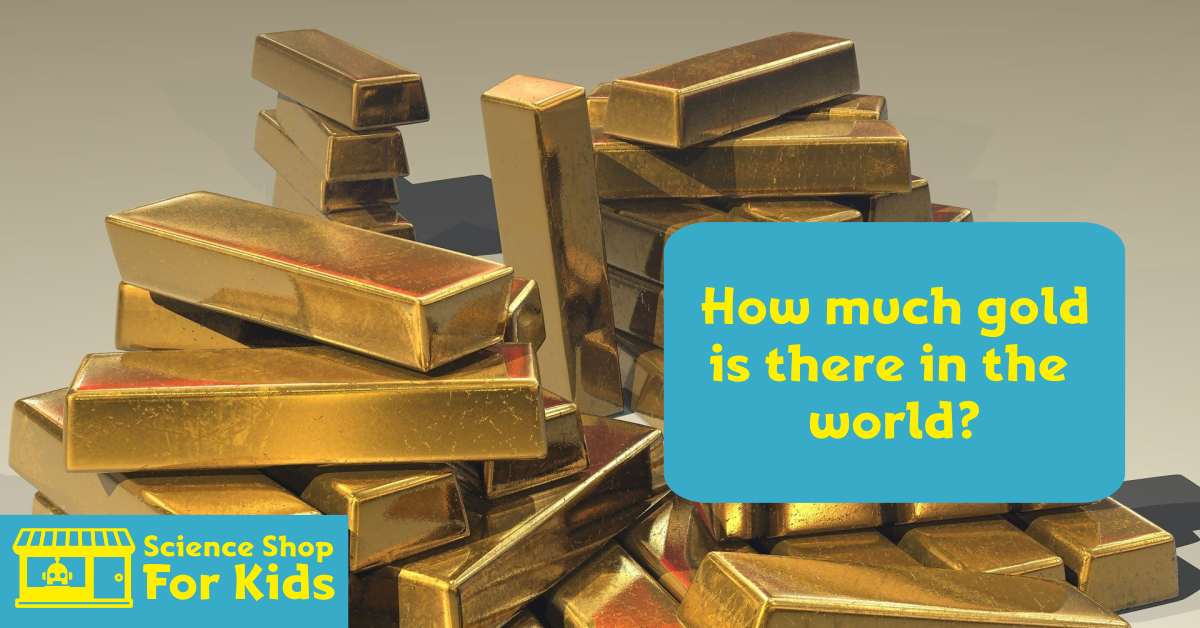 As of today there is 244,000 tons of Gold in the world ! (187,000 metric tons generated in the past plus 57,000 metric tons of underground reserves). China, Australia, and South Africa produced the most of the gold. In 2016, the United States ranked fourth in the world in terms of production.

All the gold discovered so far, would fit inside a cube that is 28 meters broad on each side.

However, it is also an essential industrial metal. That is used in computers, communications equipment, Spacecraft, jet aircraft engines, and a host of other items. The majority of the gold produced today is used in the production of jewellery.

How much is all the gold in the world worth today?

In many ways, It is a peculiar metal. For thousands of year’s, it has been widely valued. But until the introduction of electronic devices in the last few decades, it had few practical uses. There wasn’t much use for it in terms of technological progress. As it was more pliable than iron and heavier than copper. Because of its look and rarity, it has always had a high value.

Because the metal is one of the very few metals that can be found in its purest form. Early civilizations had an easier time obtaining it. But it also highlighted how precious it is today.

Due to its scarcity compared to iron or aluminium. Two significant industrial metals. They are also among the most prevalent elements on Earth. It has traditionally held a high value. Due to an increase in mining. The supply and demand of the metal have both increased over time. And, the price of the metal has continuously increased. Fantastic news for the gem investors. Since it’s one of the few commodities that almost ensures a good return on your investment.

When it comes to tracking the prices. We employ automated methods that we’ve modified. To keep track of the overall value of all the gold on earth:

Many years ago. The human race was first introduced to the metal. When a child came across a shining pebble in a brook.

Gold nuggets were the first to be found. Because it was first discovered in its natural state. In streams all over the world. There is a phrase that says “Gold is where you find it”. First metal known to early hominids, without a doubt.

As a result, the metal has become a part of every culture. To work and play with it was a pleasure thanks to its brilliance, Natural beauty, Shine and exceptional malleability and resistance to corrosion.

When the metal was first used as a currency. It was associated with the gods, the rulers, and their exaltation. Almost instinctively, humans place a high value on the metal. Connecting it with the cultural elite, power, and beauty. In addition, because of the widespread distribution of the metal. We discover that this similar thinking about gold can be observed throughout ancient and current civilizations around the world.

Money in Ancient Greece was made out of gold. Which was a precious metal. Plato and Aristotle both wrote about the metal. They had beliefs about its beginnings. When the Greeks began mining for gold. In the Mediterranean and Middle East. Around 550 B.C. In ancient times, the metal was thought to be a particularly dense combination of water and sunlight. Which was understandable given most of it was found in streams.

There’s always been a link between gold, beauty, and power. During ancient times. The metal was used to make shrines and idols (such as the Golden Calf). The metal was also used to make plates, cups, vases. Containers of all types, as well as jewellery.

Excavations in Turkey have uncovered the “Gold of Troy” treasure hoard. Which dates from the period 2450-2600 BCE. A time when the metal was highly valued but not yet a form of currency. To the contrary, it was held by the wealthy and well-connected and used to embellish sacred sites.

Humans have always valued the metal, even before it was used as currency. There was a lot of work put into it, and that shows. Since the dawn of money in the form of gold coins. Around 700 B.C. Gold prospecting has been a global endeavour for thousands of years.

Most of the time, the metal is found in its pure, original form. Gold-bearing minerals include sylvanite and calaverite. In quartz veins or placer stream gravel. The metal is frequently discovered embedded in the mineral. It’s mined in South Africa, the United States (Nevada, Alaska). Russia, Australia, and Canada, among other countries.

How much undiscovered Gold are there?

Since its discovery. Almost 244,000 metric tons have been found. (187,000 metric tons historically produced plus current underground reserves of 57,000 metric tons). China, Australia, and South Africa produced the most. United States placed fourth in production last year. According to the World Gold Council.

What is white gold?

It is an alloying metal. Meaning, it is composed of pure yellow gold mixed with alloy metals that are silvery-white in colour, such as palladium and silver

Why is it mixed with alloy metals?

For additional durability and strength. Pure gold can be combined with harder metals in each gold jewellery piece. This is due to the fact that pure gold is a soft metal on its own. Pure gold would readily bend if it weren’t for the tougher alloy metals that make it rigid.

In any of these variations. Gold alone would be excessively soft. Regardless of whether the jewellery is made of yellow, rose, or white gold.

What is Fool’s Gold?

Fool’s Gold is one of three minerals that can be found in the earth’s crust. Pyrite is the most commonly misidentified mineral as gold. Chalcopyrite and aged mica can also appear gold-like. Gold, on the other hand, gouges and indentations like soft lead. If you scrape a piece of unglazed porcelain with actual gold, you’ll get a golden yellow stripe. In addition to the white stripe, pyrite and chalcopyrite will leave a dark green to black streak.

With the symbol Au and atomic number 79. The metal is one of nature’s higher-numbered elements and one of the most expensive.

In prospecting, you’re looking for new gold mines. There are a variety of methods that are utilized. Depending on the type of deposit sought. The prospector’s financial resources available. In several industrialized countries. Placer prospecting has become a popular outdoor recreation activity. Despite its economic roots.